Netball bib sets – comfortable polyester over the shoulder bibs with elastic sides and printed position letters.  Made from the same fabric as the Silver Fern netball uniforms.  Comes in red, yellow, navy, royal blue, green and black.  Small and large sizes available.  Pink and purple comes in large only.  Set of 7.

Did you know that early netball playing days didn’t include netball bibs? From our research, these didn’t come into use until around the 1970s.

Does your team, school or club need new netball uniforms?  We also have a good range to choose from at competitive prices and are more than happy to give you a quote.  See our netball uniforms by clicking here.  Any questions, contact us. 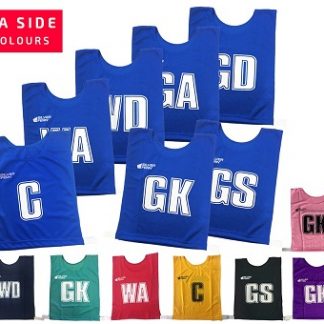