Ki-o-rahi – A traditional Māori game that used to be played with a flax ball, the game has gained popularity in recent years. Played on a circular field, Ki-o-rahi is a very fast running contact sport involving creative & quick inter passing of a “ki” (ball).

Have some fun with our Ki-o-rahi set!  Did you know that Ki-o-rahi is a NZ sport?  It is said that Ki-o-rahi as a game has been handed down over the centuries dating back to pre-European times.

Ki-o-rahi is a game well known among some mainstream places and Maori communities.  It’s played with a round ball (‘ki’) and is a fast-paced game using skills much like touch, netball and rugby union.  Rules may differ depending on what part of the country it’s played in.  Variations may include field size, ripping of tags and number of players.  Generally there are two teams of seven players.  The field is actually circular and divided into parts.  Points are scored by touching the boundary makers (‘pou’) and hitting a centre target (‘tupu’).

This game is growing in popularity in New Zealand.

Choose one of our sets or perhaps single items instead – click here to view.  Sets are a bulky item so feel free to request a freight quote. 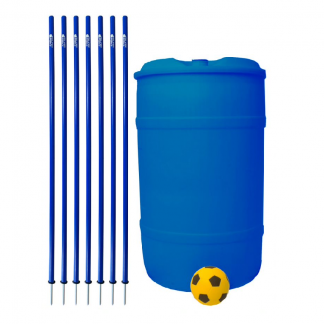